The Woman’s Club of St. Matthews is a member of the Kentucky 3rd District.

Business at the Convention 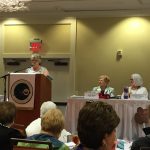 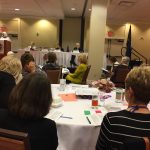 Members of WCSM shown at both tables participated in the conference. 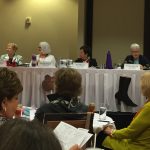 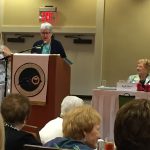 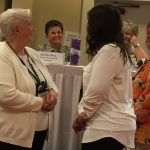 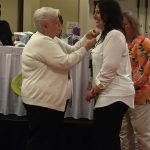 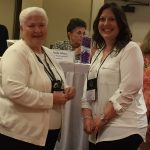 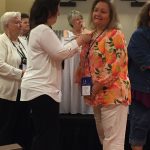 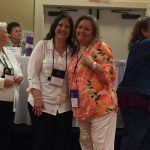 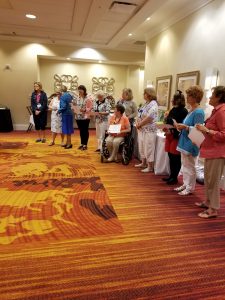 WCSM President, (in wheelchair), accepts an award on behalf of the club.

An exclusive presentation of the Kentucky Humanities. Kentucky Chautauqua and GFWC Kentucky presents, “Madeline McDowell Breckinridge“,  as she speaks about “Votes for Women”

Ms. Breckinridge is played by Kelly O’Connell Brengelman and presented a 35 minute program on Ms. Breckinridge and why it was important for her to be involved in the Woman Suffrage Association. Kentucky ratified the 19th Amendment on January 6, 1920, giving women the right to vote. 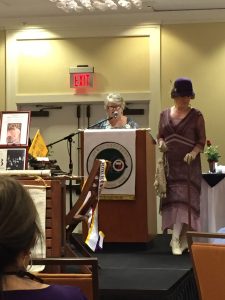 Each District was to select a Hall of Fame personality from the movies, tv, radio, record or theater. This personality could be one individual or a couple. (example Sonny & Cher) The candidate was to dress in costumer and be presented at the beginning of the GFWC KY convention. Each candidate was to raise money in support. The candidate raising the most money was honored during the 2018 convention. Proceeds from this fundraiser went toward the replacement of the heating and air conditioning units at the GFWC KY headquarters in Frankfort.

The candidates were; (L-R) 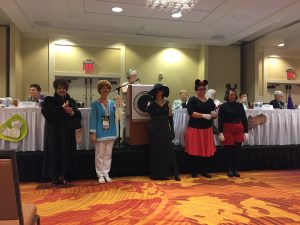 Each State General Federation of Women’s Clubs (GFWC) is invited to participate in this Project Runway challenge. Kentucky held it’s own Project Runway during the GFWC Kentucky State Convention to select our best dressed, who will continue on to the International GFWC competition for best outfit Internationally.

The challenge: To create a complete outfit using reusable TOTE BAGS. NOT plastic grocery bags but reusable bags that you can get almost anywhere. Bags used must already be owned by Club Members – so no buying new cute ones!!!!!
Bring your outfit and model it at the Kentucky State Convention where the voting will take place.
Rules: Your fashion entry must be a complete outfit; i.e. dress, top and skirt, top and pants,jumpsuit.
Either fabric reusable or plastic reusable bags can be used; no plastic grocery bags.
Entry must be made of at least 80% tote bags; other fabric and some clothing may be used, but the entire outfit must be at least 80% tote bags.
Entry does not have to be sewn; any way you keep it together is acceptable. 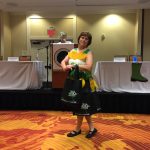 A lovely Sun Dress from District #8 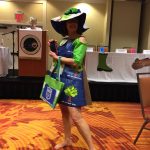 A mini Beach Outfit from District #2 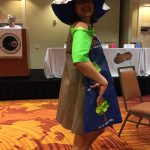 Stylish in the back too. 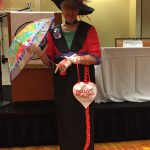 This outfit speaks ” My Fair Lady” from District # 3 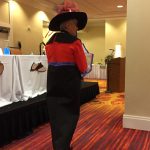 A hat complete with flowers made of recycled bags. 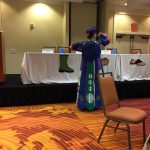 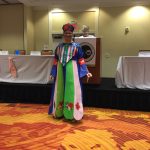 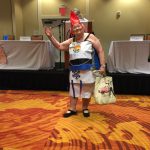 A Jokester in every bunch! District #8 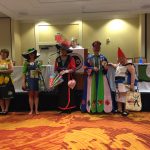 District Candidates who participated in the contest.

…… And the Winner is,…….. District 3 – Teresa Schmidt in her “My Fair Lady” outfit. She and her winning outfit were off to St. Louis for the International Competition.