Nunnlea is owned by the Beautification League of Louisville and Jefferson County, a non-profit organization.

Enter Nunnlea and step back to a gentler time. Experience the graciousness of an antebellum mansion in Louisville, Kentucky.  Built in the 1850s, the house and its outbuildings are listed on the National Register of Historic Places.  Nunnlea contains beautiful crystal chandeliers and a marble fireplace with the original mantle in every room. 14 1/2 foot ceilings, tall windows and floors of herringbone patterned oak add to the elegance. The hospitality of a gracious house awaits. 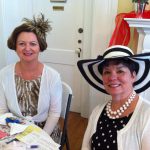 A couple of Derby Debs 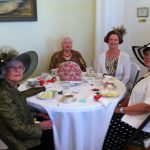 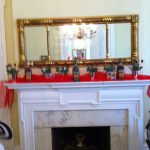 Nunnlea is decorated in a Derby theme 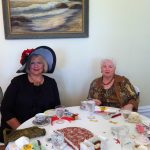 Tea for two and more 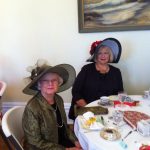 Nunnlea House hosts a tea twice a year: A Victorian Christmas Tea and a Derby Tea. The home is decorated for the theme of each tea with tables of fine linen and silver.  The public is welcome to attend for an elegant afternoon of delicious food, assorted tea, and enjoyment.   Get more information about Nunnlea House teas  Click Here

This white one-story brick house is presently situated on almost 2 acres on Hurstbourne Parkway. The architecture of the house is unusual in Jefferson County , and only a few similar 19th century houses exist. It has a large fan-lighted entrance flanked by floor lenght windows, and the interior still has the original mantels and wooodwork done in a modified early Greek Revival motif. A smokehouse and slave quarters still remain on the grounds.

Originally, Nunnlea was one of three family homes surrounded by hundreds of acres, built by members of the Funk family.  In 1792 and 1793, Jacob Funk bought nearly 300 acres in the Linn Station area from Peyton Short, who in 1786 had bought half the military grant of 2,000 acres owned by henry Harrison of Virginia.

Funk’s sons, John and Jacob, inherited the land, and John’s son Peter eventually acquired it. Peter Funk married Harriet Hite in 1813 and built the house known as Cherry Spring for their family of 10 children. This home still stands on the northeast corner of Hurstbourne Parkway and Taylorsville Road.

One of Peter Funk’s ten children, named Harriet after her mother, married Alfred H. Hise in 1854. Eight years later, her parents conveyed 100 acres to her, “in consideration of the love and affection entertained by said parents for their said daughter and as an advancement to her”. The deeded land included Nunnlea, built after her 1854 marriage.

Alfred H. Hise died in 1863, and in 1867 Harriet sold the 100 acre tract to Samuel Wharton. It remained in the Wharton family until 1887, when it was divided in half and sold. The tract containing Nunnlea was bought y William Hunsinger and remained in his family until 1928, when it was sold to Jacob M. Owen.

In 1935 Owen sold the house to Virginia and George Eady. Mrs. Eady’s maiden name was Nunn and the house was then given the name “Nunnlea”.  Among prominent guests during the Eady residence (1935-1961) was former President Herbert Hoover, who expressed ” a lasting impression of its beauty”.

In 1961 the property was acquired by developer R. F. McMahan, Sr., who subdivided most of the land surrounding the house. The Beautification League of Louisville and Jefferson County, Inc. bought the house in 1962, saving it from being razed by the developer.

The house today is maintained by the Beautification League, which uses it for educational programs and also rents it for wedding receptions and parties. Nunnlea provides a gracious atmosphere for these functions and also a significant 19th century reminder of the life of the Funk family and early settlers in Jefferson County.